William Kay was originally employed as a jeweller’s assistant and worked for Skarratt & Co of Worcester.

When he started his own company in 1890, then known simply as “Kays of Worcester”, Kay still retained a love for the trade that he knew so well.  His early catalogues show that he supplied jewellery and “clocks, watches and timepieces to Worcester and its vicinity”.

This is a Kay’s “Perfection” Lever dating from the early 1910’s.  Kays sold hundreds, if not thousands, of these watches and they were amongst the most popular of the range of pocket watches with its customers.  One testimony, from a soldier who served in the Boer War, states that his Perfection kept perfect time even when he forded streams and rivers and the watch survived the rigours of battle and still kept good time.  This is a Swiss Made example in a 0.935 Silver case. These Swiss Made watches were imported especially for Kays against a contract placed by Kay in 1907.  The cases were safely stored in the impressive security safes, that were located within the St Oswald’s building in Worcester. 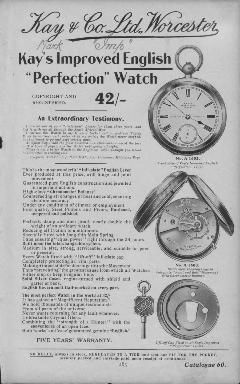 This is the page from the 1913 Spring-Summer catalogue.  The original illustration is drawn “size for size” so that prospective customers could gauge the size of the watch themselves before they bought one.  The illustration shows one of “English Made” Perfections which were still available at that time.   Of interest is the fact that the watch is Key Wound and Key Set (KWKS).  The “Kays” key is an advertising gimmick and such keys can be found for sale now and again.  They are often worth more than the watch itself.

This is an example of the Workman’s Watch that was sold by Kays from 1906 until 1919 when it stopped being featured in the catalogue.  Made of “Gun Metal” and with gold hands, it is a somewhat elaborate, even ornate,  design for a working man’s practical timepiece.  This particular example has had a hard life as the enamelled face has been painted with white paint to hide the damage to the face and the gold hour hand has been replaced with a blued steel one.  The watch, particularly the reverse, has been well worn, perhaps due to the movement within the owner’s waistcoat pocket.  The motto around the face reads “We require 8 hours for work, 8 hours for our own instruction and 8 hours for repose.”  The reverse of the watch shows an engraving of Mother Industry standing between two working men who are shaking hands, while she holds an olive branch above them.  The motto on the reverse of the watch reads “Working men of every country, unite together to defend your rights“.  The red Arabic numerals were a later addition as an Act of Parliament in the early 1920s required that all watches were to have the 24 hours clock times on their face.

This is a page (below) from the catalogue of 1913 showing the watch featured above.    It is understood that such watches were made for Kays and they were intended to be sold to the working man during the troubled times of the early 20th century.  This is a period when the labour movement and Trades Unions were becoming more powerful.  Kays could show solidarity with its customers and hopefully encourage more sales to the working classes.  (Note: the ruler edge on the right-hand side of the page is a modern addition, added during the scanning of the original image, to show that the watch was drawn size-for-size on the page.)

Wristwatches were still made with the “Kays” name up until 1994 (the 200th anniversary of the company).  Here is an image, taken by Kays’ own photographic studio, of some of the designs for both ladies and gentlemen’s watches that could be purchased through the catalogue.  Often these watches were also given as retirement or long-service gifts by the Kays directors to members of staff.  Companies, such as Avia, were commissioned to make these watches.

In 1896, Kay & Co Ltd bought Skarratt & Co, from John Martin Skarratt, and amalgamated the entire business into its operations.  Part of the purchase of Skarratt & Co included the contract that was held by them to supply “clocks, watches and timepieces” to the Great Western Railway.  This contract became a very important part of Kays’ future business activities.  Skilled watch and clock-makers were employed, by Kays, from across the country and these men visited the railway throughout its entire network. The men repaired and maintained the “clocks, watches and timepieces” to ensure that these stayed in good working order and maintained the correct time.

The picture shows a Kays clock that was built and then assembled by Kays on Paddington Station in 1906 for the Great Western Railway company.  In later catalogues, Kays proclaimed that they also supplied clocks and watches to the Italian Rail network, although no research has yet been done to confirm this.

The Kays clock on Platform 1 of Paddington Station in September 2003.  Although damaged during and then repaired after World War 2, the clock still keeps time above the busy platforms of this major London station.  This clock has featured in many feature films from the 1940s and 1950s in scenes when young men met their girlfriends under the station clock.  Sadly It has lost it ornate pediment over time.

This two-faced Kays railway station clock is maintained and preserved by the Severn Valley Railway at its station in Bewdley, Worcestershire.  The pendulum for the clock and the movement are contained in the pillar on which the clock is mounted (visible behind and beneath the clock in this view).  Again because of the contract Kays had with GWR, many of their railway stations had Kays’ clocks on them.  We are always interested to hear of any Kays clock that might still exist so please “contact the group” if you discover one.

This is an example of a Kays’ turret clock that still exists.  This particular clock was mounted on the wall of the “Crown Hotel” developments that were built in the early 1900s in Worcester.  The clock was placed on the walls facing Angel Place.  This area is now one of the main shopping precincts (Crowngate) in Worcester and the city’s market is permanently based in Angel Place.  Although the makers name is missing in this image, taken in 2003, there are earlier images that clearly show the name of “Kays” on the clock face, beneath the central boss for the hands.

This is Kay’s two-face platform clock that was purchased by the company in the mid-1980s and the ownership of which passed to the Kays Heritage Group subsequently.  Although the name of the company appears on the face, it is a fact a recent addition having been added in the early 1990’s as a marketing tool.  The exact age of the clock is still being researched and the group would welcome any information about its origins – perhaps even a photograph of it in place within a station. The clock has been in storage within the Worcester warehouse since it was purchased but this warehouse is closing in the early part of 2007. Following some discussions with the Gloucestershire & Warwickshire Railway Trust, based at Toddington, Glos, by February 2007 the clock had been dismantled by volunteers of the GWR Trust and moved to their storage facilities. After restoration, current plans if finance can be found, would see the clock being erected at the station at Broadway, Worcestershire, thereby bringing the clock back to its home county.

A view of the partially restored movement for the clock above.  More work would be required to complete the restoration but the group does have most of the spare parts needed to do so.  The name “Kay & Co Ltd, Worcester” is engraved on the silver dial and so shows the origins of the clock.

This clock is part of the Heritage Collection and is currently in storage.  Made in the mid 1890’s, the clock is intact although the face and the movement will require some restoration to bring them back to working order.  The case is inlaid with a variety of coloured woods and research suggest that the case was made in the USA and then imported to England where the movement was fitted.  According to the original copy for the catalogue, the pendulum was filled with mercury!

This is a page from the 1893 catalogue showing the clock featured above, illustrated in the bottom right-hand corner of the page.  Although there are some design differences between the illustration and the actual clock, this was not uncommon in those days.  Kays often placed a disclaimer in the catalogues that the illustrations may differ from the items supplied to their customers.  The clock would have cost the customer £2/10s/0d, or fifty shillings, in 1893.  This was a considerable sum of money to a buyer in 1893 but such an antique item would be worth a great deal more today.

This is an example of a eight-day, trunk clock as supplied, by Kays, to the Great Western Railways in the early 20th century.  This beautifully preserved example is to be seen in the Relics room of the Didcot Railway Centre in Oxfordshire.  Many thousands of these clocks were supplied to the public, to schools, churches and public bodies, as well as the railway.

This is the catalogue page from the Spring/Summer 1907 catalogue that features the clock at the Didcot Railway Centre (shown above).  The clock would have cost £4.50, or more properly 90 shillings, in 1907 and this was therefore an expensive clock to buy.  It was available in either an Oak, or Walnut or Mahogany case.  From the deep reddish colour of the Didcot example the case is thought to be mahogany.

The Heritage Group is always interested in receiving any information about any surviving Kays clocks, watches and timepieces that may still exist in museums, private collections or are still in-situ.  We will gladly receive e-mails, with some good digital images, about such artefacts and we will attempt to provide more details if we can.